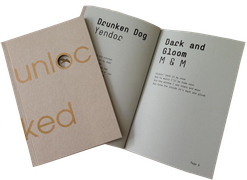 In April 2014, Johanna Featherstone and Nick Bryant-Smith ran a series of workshops atthe SCCC. The group was comprised of maximum security inmates, some of whom they had worked with previously. There are riddle-like object poems, poems for lovers, mothers, sons and daughters. Messages of hope and strength from the darkness of life inside, for people back home not to fear, “because it’s not the end/And in no time, we’ll be back home again”. The Unlocked Reader was again integral to the project, being read over and over again.