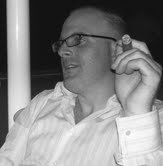 Liam Ferney is a Brisbane poet whose work can be seen in places like Meanjin, Southerly, The Age, papertiger and Cordite. He has also published in Canada, the United States and New Zealand. His first collection of poetry, Popular Mechanics, was published by Interactive Press in 2004. His second collection, the french word for 'voyage', should eventually be due for release in 2010. Between 2004-2005 he worked as co-editor of Cordite.