New Shoots Victoria is a Red Room Poetry radio series produced with the assistance of the Community Radio Network.

Red Room Poetry, in partnership with the Royal Botanic Gardens Victoria and Australian Poetry commissioned 10 Victorian poets to create work in response to plants and spaces in the Gardens. The poets then read their work at a New Shoots Victoria event, held at the Gardens during the 2017 Melbourne Writers Festival.

EPISODE 1: DREAMING OF LANDS FROM BEFORE

In Episode One, New Shoots poet Carissa Lee Godwin shares her experience of “otherness” and of finding affinity as a First Nations person in the arms of the Monterey Cypress. While long-time friend of the Garden, Chris Wallace-Crabbe reflects on the many ages and memories of youth mapped by the trees, ponds and plants he has grown up with.

New Shoots poets Bruce Pascoe and Ryan Prehn unearth the pre-colonial history of the Gardens in Episode Two. Sharing the story of the wise philosopher Kuller Kullup, Bruce reveals the history of the man who prophesied the falling of the sky after meeting missionaries at the site of the Royal Botanic Gardens Victoria. Ryan reconnects with remnant vegetation, weaving past with present through his encounters with biel, a 300-year-old remnant River Red Gum that has survived colonisation.

EPISODE 3: THE PETALS ARE THEIR OWN NEWS

New Shoots Episode Three explores Duncan Hose and Cameron Lowe’s humorous and critical observations of European botanical order and the fetishised lives of plants in the Royal Botanic Gardens Victoria. Their poems and reflections question our manipulation and mythologisation of the Gardens and our life with these plants. 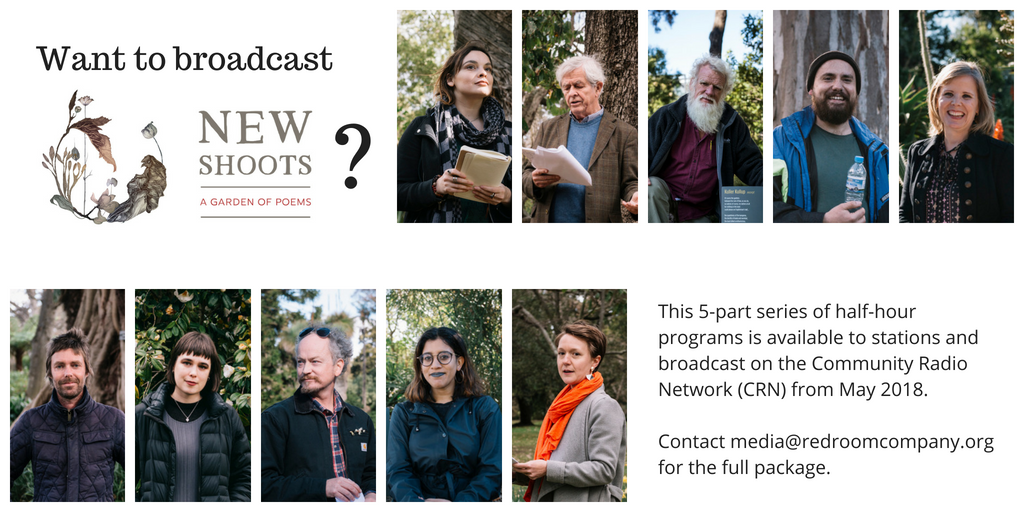