I had nothing to do so I went down

and asked the cows if they knew

of any cows who could talk, and they said

there was this cow near Gulargambone

who could talk, so I got into this guy's car and set off for Gulargambone

but just out of Coutts Crossing I ran over this guy

who bore a (rapidly) passing resemblance to James Thomson, considered by some to

I didn't know what to do, but looking

so I thought he was probably okay

because that would involve the police, who at that stage had a warrant

out for me, so feeling pretty lousy about the whole thing

I continued driving through the pastoral countryside

listening to a radio interview with the cricketer Bob Cowper

who, they say, is a descendant of the fifth best poet of the 18th century.

Just near the town of Warialda I got tired, as

I had never driven a car before

and I had been driving for many hours,

so I pulled up next to a bridge and went

and slept under the bridge where it was dry

and some kind of mouse-like creature

kept running back and forth over me,

I didn't mind, it was company

but I slept fitfully, dreaming

that I was being pursued by a chainsaw-wielding Wililam Collins, the fourth

In the morning I felt great, better

than for a long, long time  because of this great dream that I'd had

just before waking, in which I was having sex with Susannah Myles

the newsreader. It was blissful, I can't

describe it, I lack the vocabulary

of Jonathan Swift, the third best poet of the 18th century.

I got up and kept driving

in the sunshine, feeling great

the police stopped me once to breath-test me

I just smiled at them so they couldn't help

but like me, they didn't even ask to see my licence

I blew into the bag and the reading came out at zero,

and I said, in an attempt to make

Having bad breath isn't a crime is it officer?'

and the policeman said, 'My mother in law'd be behind bars if it was,

' and I pulled away smiling, I was really

getting the hang of driving now, I almost ran over a guy  j

ust out of Narrabri but it wasn't my fault,

he was wearing clothes the same colour as the highway

The trick is just to keep watching everything

of the complete works of Alexander Pope, the second best poet of the 18th

I drove through Coonabarabran, Biddon and Gilgandra

and around Gilgandra I could see these huge

purple mountains and I thought Shit!

There shouldn't be any mountains here!

(for I had studied that country

by map, for a long time)

but it turned out it wasn't mountains

just very tall men,  and I could almost smell Gulargambone by now, I was getting so close -

the hot sweet smell of a woman's

you know what, I don't need to tell you officer -

a happening, and asked the sparrows

of Gulargambone where the cow who could talk was,

but they said she had died

the week before, I had just missed the funeral

(how typical of the rotten luck that has dogged my life!)

but all was not lost however; I did find this horse

who was a very good conversationalist

the best poet of the 18th century.

Brain Hawkins 'south' & 'the poets of the 18th century' 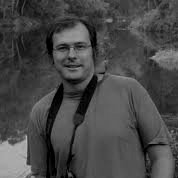