Crossing to the Fitzroy

Beautiful the light here at sunset, soft pink flame;
but more beautiful always at breaking dawn,
when over the lily-dressed lagoons of the Ord
the fruit bats are fuming out in one long black
trailing shawl to their feeding grounds.

We have taken the road to the south
three thousand kilometres or more,
to run the slick of bitumen to cities
where there are more people than bats.

By this long road where red-tinged euros
stand indolently, the small birds that
wake early, whistle and call to brethren.
And the fat-bellied boabs make shadows
even longer than us, sharing the redness
of the lazy sun hanging in the eastern sky.

The way to the sea is over the sea,
over what was once the Devonian sea here,
which is now prickled with boabs and bauhinias,
eucalypts and grevilleas and great grassy plains.
For the monster limestone reef of that ancient sea
can wreck no more. We follow its grey ridge
of crumpled forms but it is land-bound now
like a broken-backed python coiled forever
over this top end country endlessly. At
the Fitzroy it is sundown and the cliffs
flame tangerine above scarcely rippled
blue-green water. Here freshwater crocodiles
slide silently in, to fish the shallows. And we
stand back and contemplate antiquity.

So this seaway leads us on to seething blue
of Roebuck Bay. Mangroves cluster there,
and the hulks of luggers which no more
set to sea to make their lustrous harvests
of the rolling pearls in shells, born each
of an irritant grain of this seabed’s sands.

The sense of a sea song coming on the land breeze
is like the crafted pearl in the oyster’s maw,
promises of fortunes to go round smooth throats.

One hundred and sixty kilometres
or one hundred miles. Fifteen lay-bys
and the same number of yellow bins
each with its mesh against crows
or dingoes or other predatory types.
Here may be observed the predators
of leisure: the Winnebagos and converted
charabancs, the Baravans and Jaycos,
and the ‘Brits on Tour’ in their white
rentavans checking out the colonials
under the coolabahs and the cajuputs.

See the missus trotting coyly like a fox
going to earth, making for the corrugated
iron closet while he, pendulous
over belted knee-length khaki shorts,
checks out his gas bottles or his ‘Pat. Pend.’
special one-man-operational tow hitch.

Leafless and silent, swollen as if in grief,
drab boabs squint at fellow sentinels
of the savannah: termite mounds, red sphincters,
of the desert, or rotund, squatting in phalanxes.
The boabs wrinkle ruined noses even more
and underground termites seethe
as whole convoys of departing nomads,
grey or silverback tourists, stir red dust
as they spurt across the lay-by to the tarmac.
Next stop 200 kays, for a chicken roll,
a tepid coke and a tank of fuel.

We couldn’t have known to expect
those two lines scraped across highway
at journey’s end, when we crept out
at dawn across the dark breathing land
eyes fixed ahead for the slightest spectral
glimpse of euros browsing close to the road.
Or stumbling cattle heading doggedly toward
waterhole or windmill or the hope
of greener grass. Strain dissipates as eastward
the sky lightens from pumpkin to lemon peel;
the west sky loses its bands of watermelon
and steel blue. Now the hazard remains
road trains: cattle or cables; ammonium
sulphate or haulpak tyres; new cars from
Korea or railway trucks; and loads
of god knows what rare ores for armaments.

Through rocky range after range and boulder
strewn flats and ridges freckled with spinifex
we are coming at last to the end of two
others who had set out at dawn like us,
That was their last one, of course, last dawn
over this whole sprawl of a country. Two lines
scraped across bitumen to point to where
the red dirt-encrusted crumpled beer can
of a four-wheel-drive was flanked now
by a pristine police car. No point any more
even in evening shades to watch for ghostly roos. 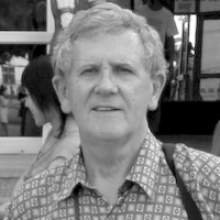 Dr Glen Phillips is a poet and professor, born 1936 in Southern…