In the stitched and re-sown cotton
of her forebears,
a mother leaves

tending to the wailing child
with cerulean eyes and golden hair. Five centuries ago,
their flesh is considered so luminous, they are given
many names for Holy, a reminder of how the skin
is marred with the sins
of earth.

A mother’s newborn is baptised
underneath an ivory God, the friars
renamed Engkanto
because the spirits of the forest
and our grandparents
are demons.

Meanwhile, the American grows feverish
laying with yellow bodies, the wine
in their bones
expelling the sewerage
of bacteria lodged in small intestine.
Filipino nurses, bearing the wounds of their sickness,
die from cholera, malaria,
the back of their husbands’ M1903 Springfield.

Their names,
a litany, filling the ocean
as it flows through the Atlantic and into
ang Kipot ng Luzon,
later filled with the rust of U.S. submarines and
Japanese convoys.

Dictator, after dictator
feed our mothers to hungry
children, mouths so monstrous
their screams
suffocate. Our mothers
mourned by men in hazmat suits,
graves untouched by family.


Who prays for our mothers
when they promise passports in exchange for crucifixion?


Who remembers the names of our mothers
when they are laid at the feet of the dying
to be reborn?

In Philippine precolonial belief systems, there are environmental spirits which can take human form of any shape, colour or size. With the arrival of the Spanish, the name they gave to this belief or phenomenon was Encanto (apparition or enchantment) – in Tagalog – Engkanto. While Engkanto represents a range of spirits, it became a popular idea that these spirits often took the form of fair-skinned people with blonde hair and blue eyes and were considered deities. Some researchers argue that early Filipinos mistook Spanish friars as a type of spirit due to the colour of their skin (similar to other accounts of Indigenous groups around the world). The fair-skinned Engkanto coincided with the image of white Jesus and Christianity, and in this imagery, I reappropriate the sacrifice of Filipino nurses. Historically, Filipino nurses were taken to the US during the malaria and cholera outbreak in the late 1890s. During WWI and WWII, Filipino nurses were also taken for the benefit of American soldiers. In the past century, Filipinos, mostly women, have been trained in care careers, at the exploitation of colonial powers. In the 1970s, the Marcos dictatorship, and subsequent governments, saw the solidification of this labour export through education and training programs designed for Filipinos to become nurses in more developed countries. 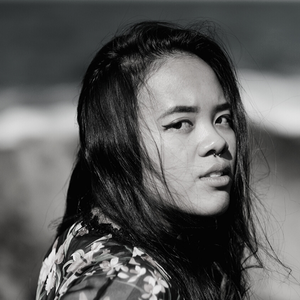 Gloria Demillo (they/them) is a poet, performer and multidisciplinary creative based in…