They found a Neanderthal skull in the North Sea,

shallow sea that was land.  Just a bone left,

shielded once in its skim of skin like the soft lives

running their course above on the whales' road.

He's his own message in a bottle, delivered by sea

as the fire takes messages to the questionable gods.

is not decimal.  Its measures are feet and inches,

the cubits of Noah's ark or fathoms' armspans

cartwheeling down.  And the king waves come in threes.

It has always been bright with gods and dark with gods,

their names piled up in waves.

forgetting what stillness means and return to land

as the moment after an earthquake.

into it they float out words and the words sink,

so they float out more after the ones missing

or found drifting and abandoned.  It takes in

This is a town of weathered stones.  They rim

the park, each inscribed with the end of someone's life:

a master mariner, a drowned man.

The saddest are loud with the deaths of children.

Sea defaces the stones in its slow riot,

and ocean and dry land are just a matter

of degree, as the waves of cloud break

over the mountain.  The stones' names come

from Perthshire and Dumfriess, Cork and Leipzig.  They're left

out to where water hardens into land

and electric echoes skip over it.  Down there

as they might be on worlds where no tail ever

tripped through ocean, no gill breathed.

Up here where the wind is whining through the rigging,

apart the cracks in things.

Somewhere out there is the idea of a drowned cathedral.

Through holes in the stained glass swim improbable fish.

The light that spirals down is already broken

when it picks out the stingrays circling

like church bats.  At the base of the organ

the satyrs are still whole but the trumpeting angels

are noseless on pipe tops.

If there could ever be

a house of god it would be this: perched on the shelf-edge

where he tries to remember what was down there

at the most submerged beginning, how he came

to be here on the edge of things, old man of the sea. 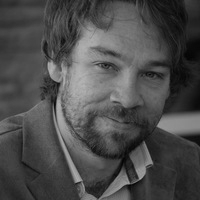