The Pix, forbidden by Nanna, so I was forced to sneakiness,
gave me first glimpses of Fannie Bay - scandalous gaol in far Darwin.
Prisoners chained to each other, wearing only nagas. (Oh Nanna,

Fannie was a gaol, which perturbed me, cos
fannie was a part of my body, and Nanna had one too.
We didn’t mention that bit, though I had to rub
between my legs with a soapy flannel. It stung.

My first night in Darwin the kids and I camped on Fannie Bay,
sleeping on sand where now the Museum of Arts and Science reigns.
Fannie Bay Gaol glowered. A guard manned the watch tower.
We couldn’t see in - high corrugated iron walls. We drove slowly past.

It was not an historic site then. Her Majesty's Gaol and Labour Prison
opened 20 September 1883, and still housed the Territory’s wickedness
in 1971. I still shiver thinking of poor buggars shut in gaols.
Goyder surveyed the township of Palmerston. A nice little beach

for Vesty Meat Works, and the encroachment reached a acme with a neo Egyptian
pyramid casino. The Larakia had a lot to look over,
and to overlook in the struggle for power.

The young ladies were wont to lead the cream of society on horseback
along the scimitar sweep of Fannie Bay beach and the cliffs of East Point
to watch for incoming ships. We still watch for ships: yachts sail for Ambon,
LNG boats bound for Japan, cattle boats bound for Viet Nam and Indonesia,

iron ore boats bound for China, the commuter ferry to Mandorah.
Our eyes scan the Arafura Sea, we drink champagne and toast Fannie Bay -
her famous fiery sunsets.
In 1971 we tracked the curved blade of creamy coral sand to East Point;

we clambered over gun turrets, we scratched in concert
with orange-footed bush chooks, searching for shell case souvenirs
of WW2 in vine forest thicket. This week, sooty oyster-catchers
watch the tide flood around the cliffs, submerging mangroves.

The remnants of Australia’s Defence of the North
are housed in a flash new Military Museum, but
bush chooks still scratch a living. My friend
photographs Wet Season fungi, we admire wallabies. 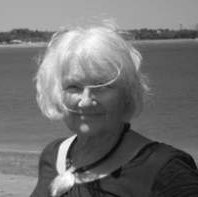