Gladys thought party short for apartment and she took
one with a ferny balcony and a good view of
the parade. The usual misfits were there. Her best
friend, Gary Two-Thumbs the ape dentist; Lana Fundingbody and her gothic squeeze Mona Persona; Henry Withchickens of course; and Dork her dog, a mind like
an onion Gladys would say: the layers! She had a pot full of

chamomile tea for a

which someone stepped in. They were all early and the punch
wasn’t ready and none were really in a mood to talk
and Gladys had come for a week so had brought all her
books, so they just sat around reading. Except Gladys who kept moving around
the apartment, checking the clock, putting a strawberry here an emu feather there watering the ferns every five minutes so soon the balcony was as wet

circa 1966. Having a good time, she’d
say. I read that last week. I just went down to get some
string or something, well you can’t buy string on Oxford Street
I suppose. They looked at me like they wanted to open up my
forehead and look in like it was a freezer stocked with gin and
icecream and whatever. Dork stared at the newspaper he was lying on. He

may not actually have been reading

He might have a mind with as much flavour as an
avocado. Gladys had thought they might want to do
their own show, so she got the electrician downstairs
to hook up a karaoke machine, but it shorted which could’ve been quite
nasty. The Gay Gods are smiling she murmured. He wasn’t even that good-
looking. Gary got up and started humming Madonna’s ‘Take A Bow’ and Gladys

started chiming in together

which they might as well have been. You deserve an award
they said to each other meaning themselves. Books are like
TV around here Gladys said. Yet Lana had
started giving Mona a shoulder rub and Henry was in the bathroom. He
came out with toothpaste on his nose and bent down for Dork to
lick it off. Jasper arrived then, surprising his aunt as he hadn’t responded

I’m a bit wired too

he said looking at the floor. He pretended he was
getting an electric shock but no one knew that’s what
he was doing: he was that bad an actor. It’s like
Sunday at the cowyards here, he said, sucking on a strawberry and an
emu feather in that order. Gladys put on a white frock. Everyone started
getting interested in alcohol again. Look at these rocks Gladys said clutching her

stroking Jasper’s hair and beard. Jasper kept saying that’s
another twenty dollars. Gladys made everyone
lemongrass martinis which mainly ended up in
the ferns. A masseur arrived for Jasper and they went into one of
the rooms. Lana and Mona were talking about a documentary they were going
to make about circus history in Australia. What about the birds? asked Henry.

It’s the birds I

out and asked them what they

thought of the parade. Lemongrass martinis how chic!
he said. Great apartment. I have the body of a
masseur and the mind of a boyband, he said. Jasper
was snoring. Gladys took Rex by the arm and led him to the
balcony. There were plenty of people below but the parade had gone leaving
its pretty debris behind. Like a papier-maché dinosaur said Gladys. That’s beautiful

said Rex. You know, you

My heart, Gladys said to him, is not a Mardi Gras.
They stared into the foliage, their heads slightly rocking.
Imaginary fern people or ladybirds stared back.
They had no apartments, no misfit cocktails, or masseurs a-text-away, no
pets with layers, ape dentistry or circus docos: no Mardi Gras. No magazine
articles like ‘Street Names for Eccentric People’. (Yet they did, they had everything.) 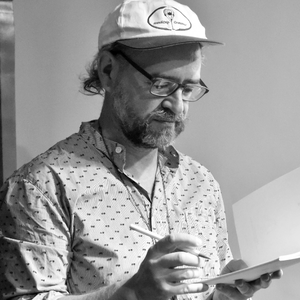