Acknowledgement is a crutch,
that helps us stand up for a second,
But the rusty manacles still cackle,
A generational burden,
dusty and devastated.

In a distant epoch,
The nation was of vibrant oil pastels,
swivelled elegantly in luminance,
against the expansive blanket sky.
But man’s ego meddled with equanimity,
and all that was seen,
was the plastic decaying into the pastel.

Humility poured her heart into mankind,
but like sugar melting in hot tea,
The unjust traits of man took control,
and century after century,
as the tea became sweet as honey,
the sugar lost its identity.

The colours were washed,
Red was the blood in homes,
Green in the savage eyes,
Blackened hands buried under rubble,
The White however persists,
held deep within the purity of hearts,
despaired and begging,
for a day when they would also
be considered as human.

Note from the poet

The Israeli-Palestinian conflict, as it is referred to as, has been going on for many decades now. It exists due to the friction caused over the ownership of control and establishment of the territories in the Eastern Mediterranean region. In between all this conflict, individuals in those areas are suffering in extreme ways. The circumstances are so repugnant to our sense of human decency that I shudder to even think of them. Bombings, attacks, and incarcerations only scratch the surface of the dire situation, an occurrence that is completely absent from mainstream media. This poem reflects my feelings and emotions upon hearing what is happening to the people in those regions. As a human being hearing about other human beings going through such harsh lifestyles hit me to the core; the poem being my way to cope with these atrocities and take a superficial journey there.

The location is said to be removed from Google Maps due to the ongoing conflict, but I found a location on maps from an article, picture attached below: 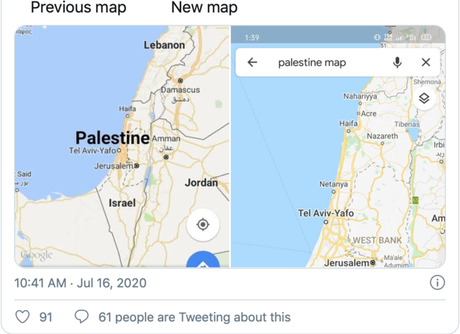