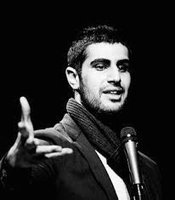 Ahmad Al Rady is a poet, university student, young community leader and social activist. At just 24 years old, his work has been showcased on the international and national stage; coming fresh off the “Speaking of Home" UAE tour, the Woodford Folk Festival, Sydney Writers Festival and the  "Write on the World" Australian inter-state spoken word tour. Ahmad is also the co-founder of Australia’s largest regular live poetry event, The Bankstown Poetry Slam (attracting an audience of 300+ every month). Ahmad also founded the LMA's 'Stand Tall, Speak Out!", Australia's largest youth spoken word program, as a way to get high school students to express the various issues facing them, from family to faith, gender to bullying, through poetry. His work has been published in both anthologies of the Bankstown Slam. When he is not writing, performing and socially advocating, Ahmad is a full-time student at the University of Western Sydney (UWS), currently completing his Masters of Podiatric Medicine and undergoing honours research focusing on preventive strategies of diabetes-related lower limb complications.