As poets, we are often delving into our shadows, trying to catch and pin them down like entomologists pinning rare specimens of butterflies and beetles to display boards.

Back when I was in high school, I was thrown out of HSC English because the school thought it more prudent to give my place in the class to another kid with more promise. I was put into geography instead. I found the subject of English impossible. I had no idea why we had to interpret poems that were coded in a language I could not make sense of. I tried hard to write essays that made my gut ache, while reading Shakespeare aloud in class made me feel nauseous, frustrated and downright bewildered. Imagine my surprise (shock?) to go on to publish three books and now to be commissioned by Red Room Poetry to write three poems in response to the Shadow Catchers exhibition at the AGNSW. I accepted the commission on the spot, despite being engulfed in a greater than average dose of terror – laced with wild excitement. The moment I emailed my acceptance, I immediately downward spiralled into, what if I can’t write a single word? What if what I manage to write is garbage? What if I don’t follow the rules? What if I get it wrong? The shadows of our pasts are long. No matter how much time passes, they can still wreak havoc on our present.

Despite my fears, the work had to be done. The minute I received images of the three artworks I was to respond to, I planned. I had seven weeks to write three poems, which for me was not much time at all. I gave each of the artworks one full week to get the bones of the poem down, then spent the remaining four weeks re-writing, editing, tweaking, refining and finger-crossing. Under normal circumstances, I write without boundary, without time constraints, without fear. Here I had boundaries (the artworks – though there were no boundaries as to how I could respond to them), I had time constraints and a super-sized serving of fear. I have never worked so hard. Once the poems were well underway, my terror gave way to quiet exhilaration. I could never have imagined at the start of this process that the artworks would have taken my poetry to the places they did. When I pressed send on the final poems I felt I had conquered something. A demon, perhaps? Maybe even two.

I am indebted to Red Room Poetry for this opportunity to dig so deep poetically, emotionally and psychologically – and to come out the other side knowing that while we may never be able to completely cast off the shadows of our pasts, we can still create despite them.

Go to Ali's profile to read her poems >

i leaned my head against yours

‘and the angel of the lord appeared to him and said to him, "the lord is with you, O mighty man of valor"' [judges 6:12] 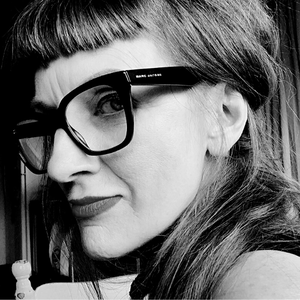 Ali Whitelock is a Scottish poet. Her latest collection, the lactic acid…