A peep of psychiatrists administer a shadow casting out a swarm of depression
- seeing but not hearing, calm exteriors but not free.
A swarm of fear clouts out judgement from a mob mentality,
steering minions into the sea.
An aerie of psychotics float on the wings, communicating with the energy
- whereas they all sit and stare.
Not knowing that that is an ancient ripple sighing there.
A prescription of hyenas shackled to this reality
like dementia patients explaining their psychedelic trip.
A frozen food of spiders will be fed instead,
to the vulnerable while the weak conquer thrones with their words of stone.
A stand with non-compliance bourne by a doctor of swallows
sitting with pensive underwear grating against a chakra, under done.
To him we look for answers and instead he cuts us short,
throwing at us fire and at us mud.
In conversation we feel withered.
In conversation he feels righteous,
misguided by a system made by paternal grandfathers of cocaine blood.
A bloat of nurses fester the brood of nurses seeking to foster,
to mother, to nurture and lift.
Instead we know that bloat pulls down the whole boat.
A blessing of patients understand yet maybe cannot see
- the strong connection needed for you and for me - together we try to stand -
but we are separated into sea and into land. Perhaps some of us are sky creatures,
not sent for anything but to witness and to breathe.
And perhaps some dwell outside the realms of thought capable.
Is comprehension valid for tickets in this reality TV?
Do we goggle box life, to shut a bubble within a fishbowl, disconnect inner from outer
- theories churn from those who came before
- and I understand they know but a snippet, nothing more.
A nest of bipolar stores until I speak no more with a zeal of suicide hinting at a different tone
- held back, hold on til the signal then jump.
With a gulp of compliance I cheek the sedative so that I can spend,
one more second trying to decipher what those clinicians say.
I am here, for now I decide to stay.
Rid the power from those weak souls who march like mosquitoes,
dripping with the life force of someone else's words.
I do not pretend I wish for anything altered.
I come from a descent of psychos. 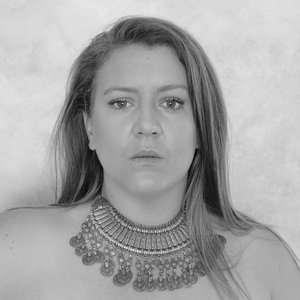 Caitlin Kozman is an emerging Australian artist, Peer Worker and co-creator of…