The poet I have chosen to inspire me is a very powerful wordsmith, a lyrical artist a beacon of light taken so soon, is none other singer and song writer Tupac Shakur. When people think of him they tend to think of his life as a rapper first and foremost followed by his affiliation with gangs, before the music. Tupac was a very prolific writer and one piece that I have chosen is called “The Rose That Grew From The Concrete”. It talks about the beauty and life in a messed up city. The words of this poem are written in a way that it is easy to see and imagine, even if you have never lived in a city.

Growing up in a small town everyone did and still does listen to his music. Nearly everyone has his album tucked away somewhere on their phone playlist or CD. His words inspired many people throughout the world to become empowered and rise against poverty and to go and get life as it comes and work hard. Even so he has been gone many years, his music is still to this day coming out and playing on radio stations, work that he himself never got the opportunity to release himself.

I am going to leave you with the poem he wrote about the rose.

The Rose That Grew From Concrete

Did you hear about the rose that grew
from a crack in the concrete?
Proving nature's law is wrong it
learned to walk with out having feet.
Funny it seems, but by keeping it's dreams,
it learned to breathe fresh air.
Long live the rose that grew from concrete
when no one else ever cared.

Celestine is a poet commissioned for the Rhyming The Dead Radio Series.

Celestine Delvene Rowe is a Central Australian poet currently living in Adelaide. A bit political, never shy on stage, rise to the challange, speaking the truth, telling the story. Celestine won the National Poetry Slam for the Alice Springs Desert Festival in 2011 and was a runner up at Heat two of the SA leg of the 2014 National Slam. 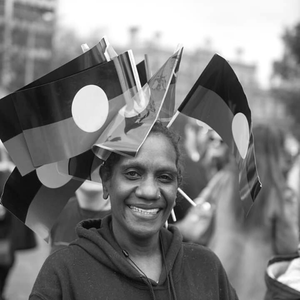