'A shot, usually involving a distant framing, that shows the spatial relations among the important figures, objects and setting in a scene.'

The doctor hands you a splinter.
You hold it carefully. You wrap and tend it,
and it wakes you at night with its small wails, its relentless hunger.
You return to the surgery to see 'the films',
in which hidden parts of your body star.
Looking at yourself onscreen, from beyond,
you become crazy absurd swirls of dark and light.
You move past that vain glimpsed-reflection impulse to preen,
straight to a lurch of self-critical disgust, spotted with denial.
The doctor notes the salient features, as though he is a teacher,
and you his star pupil, destined to outgrow him.
He clears his throat, but in a healthy genteel sort of way
that suggests nothing more about him than a schooling in tact.
He would like to ask your permission to show the film,
but he is shy with you, your new resplendence so dazzles.
Like your friends, your children, your colleagues,
he is speaking to you with a new voice: a careful, respectful sort of voice,
mindful of the insouciance and the trouble you are cultivating within.

'An instantaneous shift from a distant framing to a closer view of some portion of the same space.'

The splicing part is easy. There are tools used for cutting the negatives.
Words and phrases have the precision of surgery, and the practice.
Something clean about it: the excision. No room for doubt or faithless nights.
A series of bright scrubbed professionals wax: how positive they are.
We make one incision. Pop in and nip it out.
Like pop and nip, your face assumes the benignity of a picture book.
Reassurance is poured on you, treacly, and your bitterness occludes.

Inside, there is pacing, and the moon's thin nail is bitten to bleeding.
The nights linger on like guests who don't take the hint,
sullen-coloured, lit with an illusory pre-dawn glow.
You watch the days start up like so many coughing cars.

'A system of cutting to maintain continuous and clear narrative action'

Through the stages of grieving like a horse at a gymkhana,
only it's all offscreen. Call action, and you are strong and blithe.
This is the 'cheat cut'. Everything looks roughly the same,
though technically it's not. Like the day after a death.
The sun rolls up about where yesterday's did,
and if there was a tree yesterday, a gnarled grudge, or someone's worry beads,
they're there too. It's as though the props department has been at work,
while the editors have been dreaming, the director nonchalant.
And there are accolades: you are seen as having come through.
You are not making a fuss, or keeping it together.
In your caravan before your face is prepared for you
your handkerchief twists, your eyes are bloodshot.
The nights are drenched in the music that makes you remember.
You learn the script, but your voice sounds far away.
Yet only on close inspection would you pick the yoking together
The pretence, of days that don't match,
Things that join up only with art.

'Any alternative system of joining shots together using techniques unacceptable within continuity editing principles. Possibilities would include mismatching of temporal and spatial relations, violations of the axis of action, and concentration on graphic relationships.'

The clowns rehearse outside the next caravan.
You crush words hard against your teeth,
and they fly out of your mouth like shots,
or you spit them, blooded and cutting,
fretted and strung with beads of shiny compressed feeling.
You are drowning inside yourself, and alone there.
Anger jerks out of you, or unstopping crying that falls fluent
the way it does in dreams: salty, benedictory.
The skirt of your feelings is stuck in the car door,
and flaps at passers-by without your knowing.

'Cuts that repeat part or all of an action.'

In the dream you sent me a letter.
A very slow dream, a very short letter, read in slow motion.
I walked down the path, opened the letterbox, took the letter out:
The letter didn't say much. But a letter from a dead man
is a remarkable one, and in the dream I knew I should keep it.
Even as it dissolved in my hands, and I forgot what you had said,
I was thinking of this evidence of conversations after death.
When I brought the letter inside, my hand, of course, held sand.
I couldn't keep hold of the grains, and soon there was nothing. 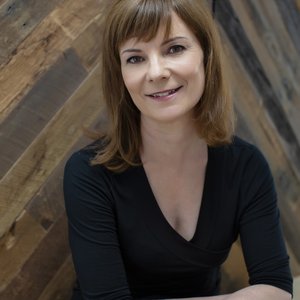 Felicity is a poet and critic. Her books are A Kinder Sea…