He imagined eyes watching him.

Through the scarred blind he looked about

the concrete yard, saw nothing different.

The exposed front door was the only

way out, down the hall, past other lonely

lodgers' rooms.  He chewed his uncooked

the plan, convinced nerve was held by

sticking to routine.  He rinsed the plate

rehearsing in his mind.  He would hate

to slip up.  He switched off the heat, checked

the time, opened the door, stared both

ways along the dead street without

turning his head.  He knew all the parked

cars.  At the corner phone a dog barked

a forlorn cry from a base animal.

a sinner's prayer, a treacherous lie.

Then the unseen car that would be found

burned, the gun, window down, that awful sound. 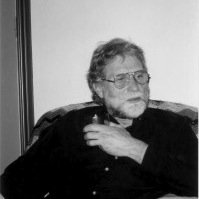 Ian C Smith lives in the Gippsland Lakes region of Victoria. His…