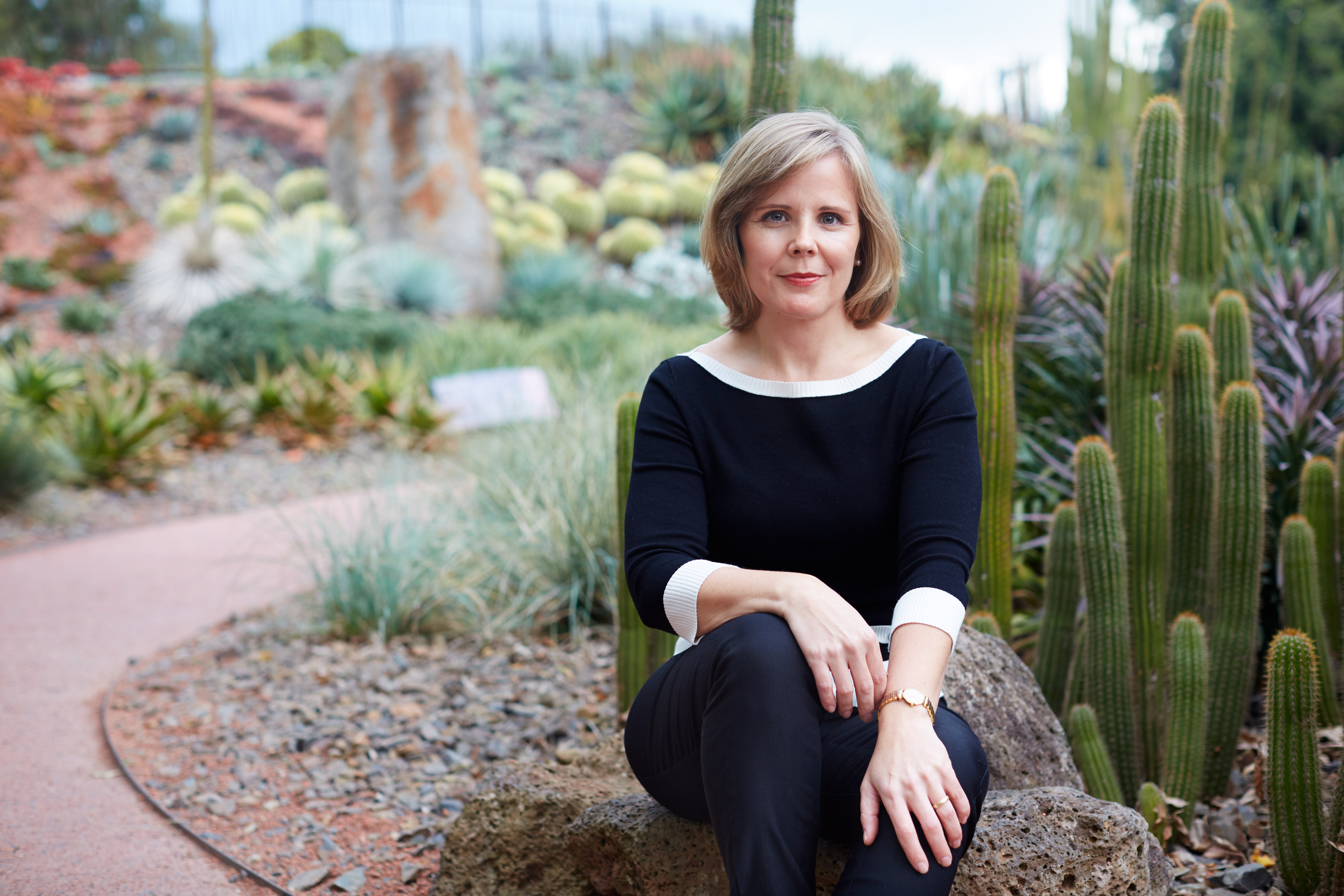 when the park gates are majestically black and bolted,
how the stars settle on the sacred ceiba
and streams of Royal Agave coveting their own hearts;
how pale florets glisten on the gorgon arms of euphorbias,
while the Apple Cactuses undress blossom after blossom
for the celestial moths and bats;

how the pond mirrors the moonlit sky, while the reedbeds shift
about in the muck, glib as the tortoises,
the air stilled by their submarine magic.

~ from 'Guilfoyle's Volcano' by Maria Takolander

Maria Takolander features in New Shoots: A Garden of Poems in the Royal Botanic Gardens Victoria. The launch tour (booked out), follows poems 'planted' in the gardens, an installation of 'poetic pathways' which will remain indefinitely.
---

Look, I want to love this world
as though it’s the last chance I’m ever going to get
to be alive
and know it.
— Mary Douglas

The chance to write about the Royal Botanic Gardens Victoria was a chance to experience an aspect of the world that, as a poet, I had not attended to before. While I am a lyric poet, I am not known as a nature poet, so I welcomed the invitation from Red Room Poetry and Australian Poetry to join the New Shoots garden of poems. Here was an opportunity to engage with a new subject in that simultaneously rigorous and emotional way that I find vital to writing poetry. Here was a challenge to my ignorance and indifference; here was a call to communion and rapture.

The task of writing a poem is fundamentally one of coming to some understanding. When I say understanding, I do not use the word lightly. Writing poetry is a cognitive exercise, and a linguistic one, but it is also always more than that. For me, poetry conveys not only the intellectual knowledge of something but also the embodied experience of being a human being in contact with that something. Therefore, feeling is as much a part of the understanding as thinking. What do we feel when we allow ourselves to see plants and to respond to their ways of being on this planet? Of course, the articulation of emotions, which originate in non-linguistic cortical structures, is a vital challenge for the poet working with language.

Given this unique opportunity to explore Melbourne’s Botanic Gardens, I chose to write about the area known as Guilfoyle’s Volcano. The site is named after the second director of the gardens, William R. Guilfoyle, who designed a water reservoir in the shape of a volcano, inspired by a trip to Vanuatu. The reservoir, built in 1876, had fallen into disrepair by the twentieth century, before being rehabilitated in the twenty-first century as a site that showcases water conservation strategies and also the kinds of drought-tolerant plants that will survive the hotter and drier climate of the Anthropocene.

I chose to write about the plants at Guilfoyle’s Volcano in part to address a prejudice. I had inherited a colonial cultural preference for European plants over the kinds of drought tolerant species—from Africa, Central and South America, and Australia—featured at the location. The subject thus represented an emotional challenge and an aesthetic one, the flora not readily recalling a tradition of feeling and lyricism found in existing traditions of nature poetry that I knew about.

Distracted by the lush plantings of nearby areas in the gardens, assaulted by the sounds of the city beyond the fence—the volcano is located at the south-eastern corner near a busy intersection—I had to work hard to really see these plants in order to feel something about them. I visited the site multiple times, writing notes, taking photographs and videos with my iPhone, getting to know the plants’ textures, colours and habits—including the ways in which they resisted, with their stiffness and barbs, my interrogations, my human attempts at knowing them. I hassled the wonderful gardeners for information, which they so generously provided. At home, I researched the plants’ secret histories, the mythologies that sometimes constellated around them, traditions of medicinal or industrial repurposing, modern-day propagation tips.

Soon I was deeply enamoured—even obsessed. In the Golden Barrel Cactus (Echinocactus grusonii) of Mexico or the Medusa’s Head (Euphorbia caput-medusae) of South Africa, I could powerfully see life’s longing for itself, its desire to live in whatever shape or form it might take, its miraculous resilience from ancient times through to the destructive modern colonial periods and now through to the Anthropocene. I saw how these plants had nothing to do with humans, but also how our lives were now interconnected as surely as those of the Apple Cactuses (Cereus peruvianus) and its pollinators (moths and bats).

The poems themselves emerged from many weeks of the peculiar labour of writing poems, which involves stumbling upon the right shape and formal constraints, and which is as much about responding to the words that begin appearing on the computer screen as to the subject matter. On my computer screen, I found a long poem that attempted to bring together the marine and desert environments represented by Guilfoyle’s Volcano, with its murky pond on top and its streams of agave below. Haiku provided a propagative technique for growing knowledge about plants—an obvious one, perhaps, given the form’s importance to nature poetry in the ‘East’, even if I was dealing with a different kind of landscape and flora. And then a final poem about the magic of seeds sprung into being, fertilised by the fairy tale of Jack and the Beanstalk.

If writing poetry can feel surprising, as if the poet is being guided by a muse, it is partly because of the enchanted techniques of this ancient craft for generating words. John Keats famously described the technologies of poetry—its rhythms and rhymes and stanzas and lines, all of them energised by their past and present lives—as ‘the viewless wings of Poesy.’

I am incredibly grateful to have been given this opportunity to work as a poet at the Royal Botanic Gardens Victoria, and to have experienced again how the demands and magic of poetry can draw us into deep connection with our world.

Maria Takolander is the author of two full-length collections of poetry: The End of the World (Giramondo 2014), named one of the best books of the year by Australian Book Review and reviewed in the Los Angeles Review of Books; and Ghostly Subjects (Salt 2009), shortlisted for a Queensland Premier’s Prize. Her poems have....read more »

Maria was interviewed by Georgina Reid at The Planthunter. You can read the article here »

Scenes from a Documentary

Maria Takolander is the author of three books of poetry, The End…