To the womanising bouncer who finally had his heart

My friend Jack has an insatiable addiction. He has to

have sex all the time. One week without sex drives him

insane. Jack is not considered handsome and most women

don't give him a second glance. He is a pharmacist and

he has created a process by which he can seduce women.

He approaches them on the street and asks them out for

dinner and promises them an unforgettable night. he

asks each woman what is their favourite taste in the

world and then he goes home to his laboratory and

develops that taste in a serum and injects it into his

vein. At dinner he kisses the woman and leaves them

with their favourite taste on their mouths. Jack

avocado and lemon, garlic and cheese. there was no

taste that Jack could not create. One day he

approached the most beautiful girl at the End of the

World and asked her what her favourite taste was. She

had heard of his seduction technique and replied thats

he loved the taste of moonbeams. Jack was besotted

with her and spent many hours creating her request.

Over dinner he kissed her and a few seconds later she

spat into his face. "This isn't moonbeams," she

snarled, "you reek of poisoned rainbows. " Jack was

devastated and each time I visit him now at the mental

asylum he sits alone in his chair at the window,

gazing hopelessly at the moon.

From the lonely man

to the end of the world. 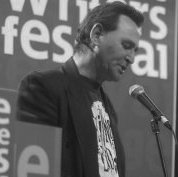