1.
The front room is Heather’s studio, where paint still glistens on a portrait of a goon bag pegged to a Hill’s Hoist. The back verandah is a filled-in slither of bathroom, with toilet at one end and shower at the other. In the photo on the plaque, the house is just a gift box: one room, ribbon of balcony.

2.
Heather tells me the place isn’t fire-safe. There’s one exit, and all the windows have security screens. From outside, the house is a child’s drawing, an outbreak of oversized windows. Down the road, Heather pitched successfully to paint the house on a traffic box: in the picture, it levitates, clinging to its roots, as if plucked whole from its plot.

3.
The Windsor–Enoggera Line opened on 5 February, 1899. That year, a railway employee bought the small house opposite. Roads ate away at its land until it stood on 73.3 square metres, the smallest block in Brisbane.

4.
One night, a drunk sitting on the kerb began to yell. Heather ignored him, until she realised he was shouting at the house. “Why would you have so many windows? Why! Why so many windows on a tiny house?!” Heather turned off all the lights and waited.

5.
With its wraparound windows, the house is ready to lift off into space. In the traffic box portrait, perhaps a UFO has used its tractor beam to take the house for dissection – or to probe the tiny-house movement.

6.
The house’s panopticon of windows has witnessed Windsor’s underbelly: fatal crashes, car chases, nearby holdups, drug deals. Heather’s succulents often vanish off the steps. The drunk offended by windows later sang to the street that he needed to take a piss, so “no one call the cops or watch my dick.” At dawn, he woke Heather by whaling on the garbos, then the cops.

8.
Tom O’Brien fitted all the modcons in 1956. The house cost him £500. He fell in love from the train window, and dreamed big things for the little house: demolished the outhouse in the pocket-square garden, connected water, and closed in the sleep-outs.

9.
A dollhouse stands in the shadow of McMansioned Queenslanders. At the inspection the day Heather applied to rent, she watched nervous couples size up the house – and each other. She’s always wanted to live alone. 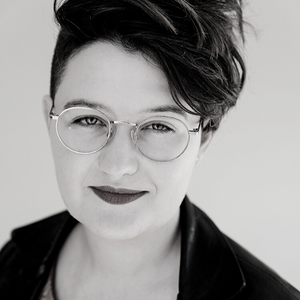 Zenobia Frost is a Brisbane-based writer whose second collection of poetry, After…