‘Trails and Tales’ is an interactive and immersive poetry installation created by the Year 9 English students at Rosebery Middle School.

The students created poems that centred around a ‘curious object’ that held personal and/or cultural significance for them. The poems were crafted and refined and supplemented with a photograph of the object itself. The finished poems and photographs were mounted and attached in hanging columns. These columns were then entered in an installation environment where painted and decorated emu and snake tracks have been pasted around the walls to signify the wildlife that is an important part of the Northern Territory culture and lifestyle.

The installation space is lit with a decorated set of star lamps acting as a camp fire and fairy lights hanging from the ceiling of the space. Red cellophane covers all windows and light sources and this creates a spooky and mystical space.

This is supported by a soundtrack of students narrating their poems that plays beneath a soundtrack of field recordings from the Northern Territory bush, with flies buzzing and birds chirping.

People entering the space can grab a small torch to view the photographs and read the poems, re-enforcing the singular and immersive experience. This installation is one that celebrates the ‘Trails and Tales’ that these poems create from student experience and memories. 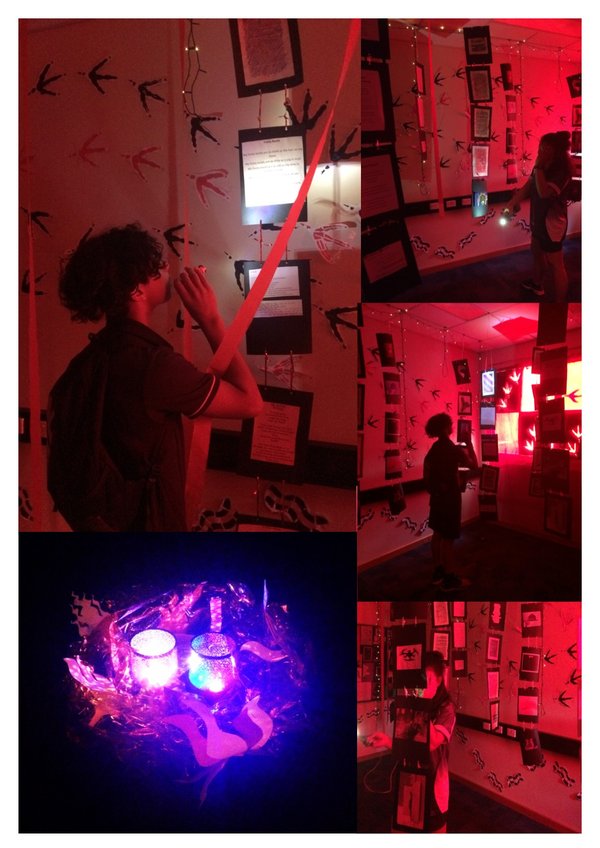