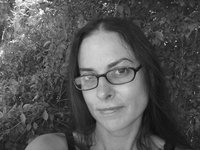 Jordie Albiston is the author of six poetry collections, and she works as an editor, manuscript assessor, proofreader and mentor. Two of her books (Botany Bay Document - retitled Dreaming Transportation - and The Hanging of Jean Lee) have bee adapted for music-theatre by Sydney composer Andrée Greenwell. Both enjoyed recent seasons at the Sydney Opera House.

Her collection, a sonnet according to 'm', won the NSW Premier's Prize in 2010. Albiston’s most recent work The Book of Ethel, a collection of poems about her great-grandmother, was published this year (2013) and was launched at the Sydney Writers Festival. Albiston was the original editor of the first all-Australian all-poetry ezine Divan, and she holds a PhD in literature. She lives in Melbourne.