Get involved with Poetry Object

My object for the poem is a book, Nature’s Secrets or Psychometric Researches, by William and Elizabeth Denton, published in 1863. The book is a British edition of the US title The Soul of Things, in which William and Elizabeth Denton present the case that objects can retain impressions of what they experience and so can remember the world around them. Furthermore, they argue that certain people, those who are psychometrically sensitive, can see and hear the objects’ experiences by interacting with those objects.

For me, the idea that objects have memories need not be a literal one. All the things around us have the memories that we place onto them. Where and when we were first given or bought them, how we found them, what we did with them. So it seemed fitting that this book, this very old book, be the basis of the poem. I have already written a number of poems about William Denton and his family and so I have spent a lot of time with the book, both physically and in relation to its contents. Memories to me, however, are not discrete: they leak into the rest of our lives and make connections. The object then becomes a nexus of a collection of memories, which is how the book acts in the poem.

In writing the poem, I had to think of the three ways in which it would be presented—as a print poem (the way it appears in print), as an audio poem (the way the poem sounds) and as an electronic poem (the way the poem appears on screen and how a reader interacts with it). While in essence the same poem, they are also formal translations of each other and had to be altered for each medium—the print and audio poems are linearisations of the electronic poem; the print poem has a spatial quality that is not in the audio poem and so on. And the fact that the poem appears in multiple versions adds another layer of meaning; it is symbolic of how we remember, of how memories are mere representations of events. 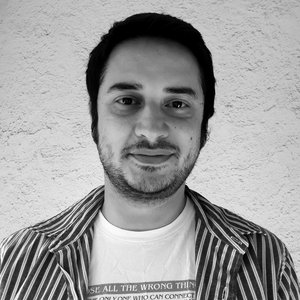 Benjamin Laird is a software developer and poet. His poems and essays…