~ Joelistics from 'All of the lights'

Peer through the looking glass with five commissioned poets, and one specially-selected public poet, as they respond creatively to Shadow catchers, an exhibition of photographs and moving image from the Gallery’s collection.

Adopting the mirror as a metaphoric device and the echo as a visual conceit, Shadow catchers offers a playful portrait of photographic doubling. Revel in poetic refractions and intimate explorations of the way photography and film reflect reality but also upend it in a series of audio recordings co-created with the Gallery.

Co-produced by the Art Gallery of New South Wales and Red Room Poetry, as part of Sydney Writers' Festival.

Explore the poems, audio and reflections below, or read and listen to excerpts from the poems, alongside images of the artworks in Poetic reflections on Shadow catchers on the Gallery's website.

Magpies , All of the lights , Donovan’s Glasses , Snow Country , The Tableland , I Grew Up A Shadow Girl, With A Man Outlined Inside Me , habitus , Double-You , Akimbo , in/sight 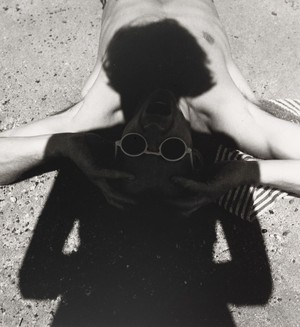 From fractured light to hidden selves, the Shadow catchers open-call out revealed the myriad ways a photograph is not merely a reflection... Our winning poet, Maddie Godfrey received a Red Room Poetry commission and joined Saba, David, Melinda, Joelistics and Ali to create poems in response to the Shadow catchers exhibition.