Stacks was a project run by The Red Room Company which consisted of a series of poetry workshops in City of Sydney Libraries during August and the first weeks of September in 2011.

The facilitating poets were commissioned to create a new work that responded to the special collections of each library. These poems, as well as the poems written by workshop participants, were then incorporated into an animated pop-up book by Sydney designer Tasman Munro. The book, The Analogue Crusader, and its animation, will tour a number of libraries in the coming months.

Check out the pictures here.

Our Poems to Share cards were also installed across several City of Sydney Libraries for 40 Days of Poetry. The cards and writing exercises invited the public to pen new poems and share them with The Red Room Company. Poems written in response to the 40 Days of Poetry activities are collected online. 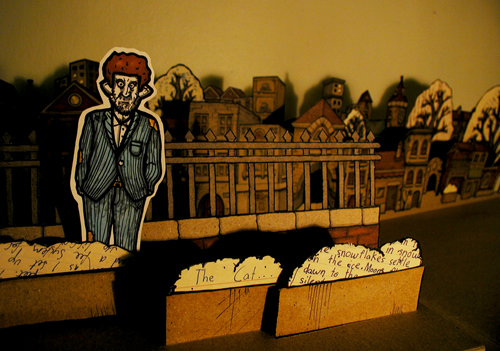 Library, The Library of Names, Library Animals, 27 and no longer, lackadaisical love letter, 2P, Untethered, Wasted Dreams, Alien Poem, Parrots of the mountains, Our collars, iridescent violet-green, Hermes, Words in italics are from the The Doctor’s show on Triplej, Bind us to no master, Inward breath, Found, Ode to the new generation!, Everything, Ego, After the Call, a winter poem, Conclusively inconclusive, Hyde Park, Will be money...

Visit our online store to purchase publications and materials from this project. Red Room Poetry is a not-for-profit organisation. All funds raised support the ongoing work of Red Room Poetry.